The fungi of Metchosin were more than cooperative for Metchosin Mycoblitz 2019, the seventh in the annual Metchosin Biodiversity Project series.  This fall has been one of the best mushroom years in memory.

The MycoBlitz began with a media bang on Friday night, November 8, when Dr. Cara Gibson gave a talk on insect and fungi interactions to a packed house. The talk doubled as one of the Metchosin Talk and Walk events (#115 in the long-running series).  Cara, a Canadian who has recently returned to Canada after a long stay in the U. S. for graduate study and teaching, is a welcome addition to the already deep mycological resources in the Victoria region.  For more on Cara’s talk, see the Talk and Walk web page.

The Saturday foray began at 9:00 am in front of the Metchosin District Office. A light mist fell as 60 people, including about 15 invited experts, assembled to be divided into three groups, one to go to Camp Thunderbird, one to Pearson College, and one to Metchosin Wilderness Park. 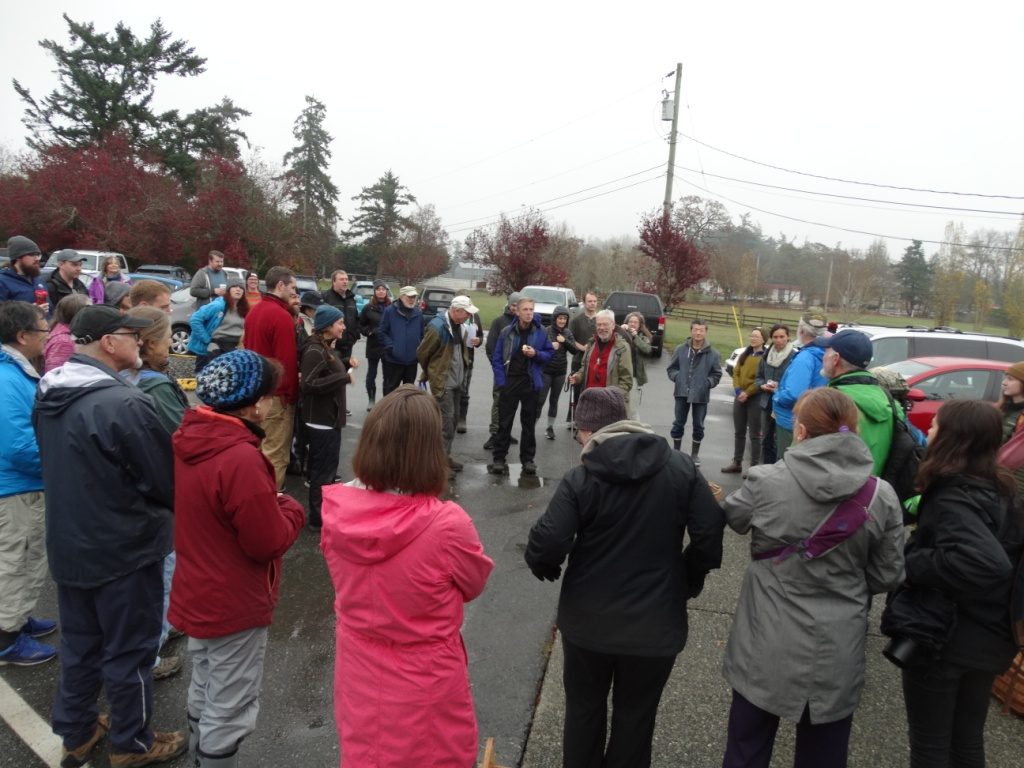 Mushroom experts for the 2019 Metchosin MycoBlitz

The MycoBlitz would not be possible without the help of regional experts on mushrooms. Here is the team for this year's MycoBlitz (old and young). A big thanks to all of them for volunteering their valuable time. Photo by James Holkko.

The groups returned from the three forays a little before noon to drop off their mushroom collections. Experts immediately began sorting and labeling the fungal treasures, taking time out only to have a quick lunch of homemade soups, pizza, and pastries.

While experts sorted and labeled, the rest of the crowd adjourned to the Metchosin Fire Hall to watch a The Nature of Things documentary on fungi.

At 2:00 pm the guests began to arrive.  Laid out on three tables were 134 different species of mushrooms.

For two hours, the hall was a noisy, bustling place. Comments ranged from “Ahhh” to “Ewww” to “Can I eat it?” Photos by James Holkko. Click to enlarge.

When the crowds leave, the tabulating and recording starts. This year the Metchosin Biodiversity Project database has been expanded to include iNaturalist. Pictures were taken of the specimens on the table and 180 visual records were added to the Project’s iNaturalist list.  The records included 134 different species.  About 15 of these were new to the database, lifting the species count for the Metchosin Biodiversity Project to 2800 species.

The observations can be viewed on iNaturalist.

Besides the many volunteers, the Metchosin Biodiversity Project received help from several organizations and individuals.  A special thanks to

In February, the Metchosin Muse published an article on the 2019 Metchosin Mycoblitz. Click on image to view.